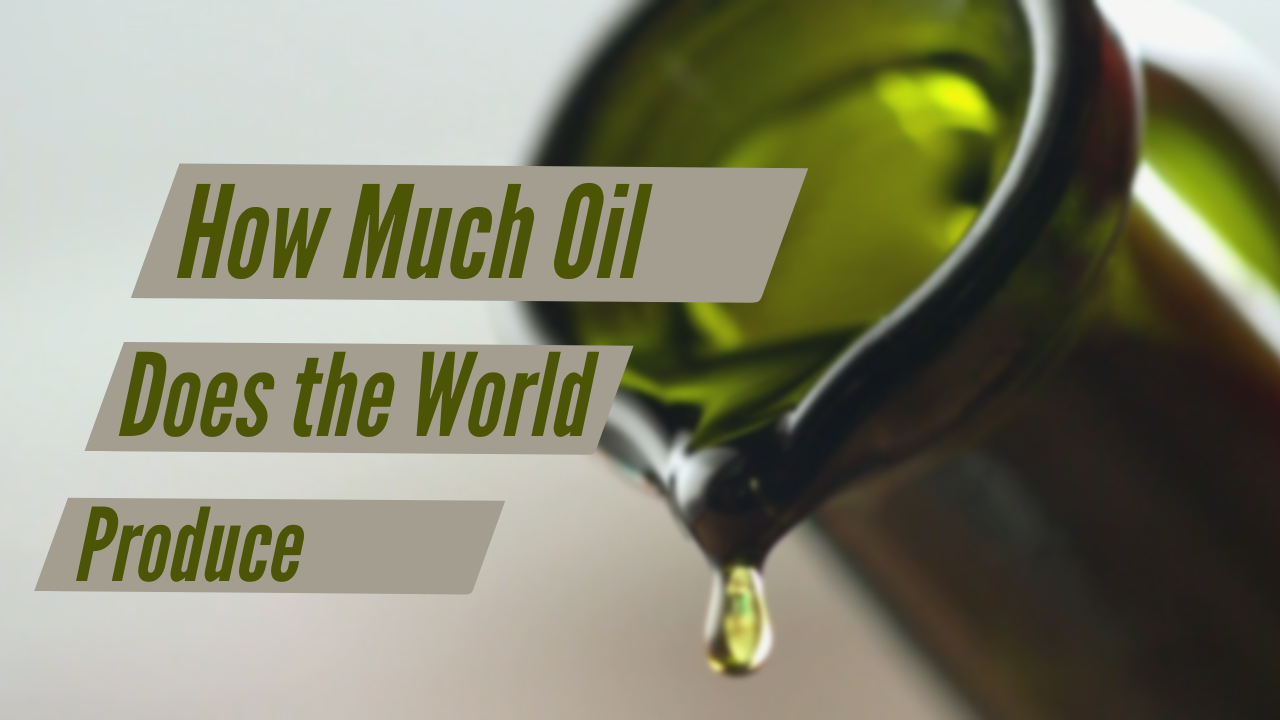 In the first installment of this series, I took a look at U.S. and global oil reserves according to the 2012 BP Statistical Review of World Energy. Today, I want to examine oil production statistics since 1965. Highlights of this article and topics that will be explored include:

The first graphic shows the growth in oil production from 1965 to 2011. A new global oil production record was set in 2011 at 83.6 million barrels per day. This figure includes production of crude oil and natural gas liquids (NGLs), which are not indicated separately. (In the U.S., around 25% of NGLs end up as refinery inputs; most of the rest is petrochemical feedstock).

Global production is lower than BP’s reported consumption figure of 88 million barrels per day (also a record) because the latter includes contributions from biofuels, fuels derived from coal, and any other fuels that are not derived from petroleum. Inventory changes would also be reflected in this number (i.e., one could in theory consume more in 2011 than was produced by drawing down inventories from 2010).

President Obama: An Oilman in the Oval Office?

The next figure shows the history of U.S. oil production, which peaked in 1970 at 11.3 million barrels per day. Again, this includes roughly 2 million bpd of NGLs, which explains why the Energy Information Administration pegs the 1970 peak at 9.6 million bpd. 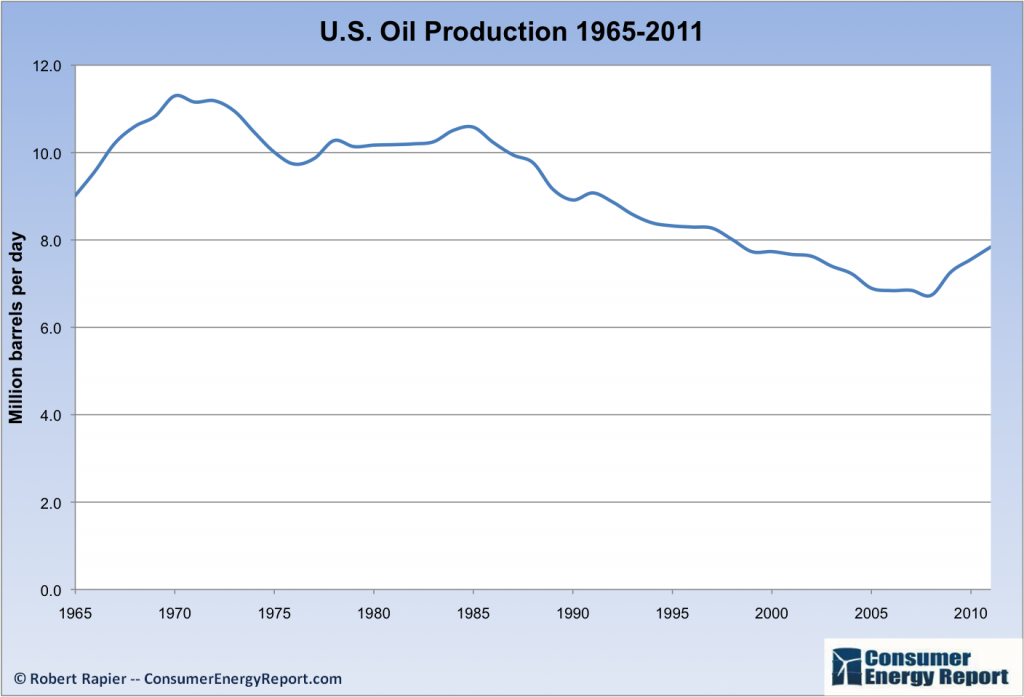 After 1970, U.S. production declined until 1977 when the Alaska pipeline began to operate. Following a few years of rising production as Alaskan oil production ramped up, the decline continued until 2008 when production reached 6.7 million bpd — 40% below the 1970 peak (per the BP data).

Then President Obama came riding to the rescue, and oil production has been rising ever since. At least that’s the story as I am sure it will unfold as the presidential campaign heats up. U.S. oil production in 2011 is in fact 16% higher than it was during the final year of the Bush Administration.

In reality, the rise in U.S. oil production is due to three factors: 1). Breakthroughs in hydraulic fracturing opened up new oil production opportunities in North Dakota and Texas; 2). Record oil prices resulted in record investments by oil companies for new production; and 3). Higher oil prices enabled more marginal oil to be produced (made possible by the first two factors).

Note that none of these factors are really influenced by the actions of U.S. presidents (although longer term, their policies can have significant impact). However, politicians like to take credit when things are going well, and point fingers when things are going badly, so I expect there to be a lot of rhetoric around this topic in coming months.

While we can debate the reasons, of one thing I am fairly certain. U.S. oil production will rise again this year, which means President Obama will have presided over 4 straight years of increasing domestic oil production. This will be the first time that has taken place since the administration of Lyndon B. Johnson.

U.S. Oil Production Compared to Rest of the World

The final graphic shows U.S. production in relation to the global total. 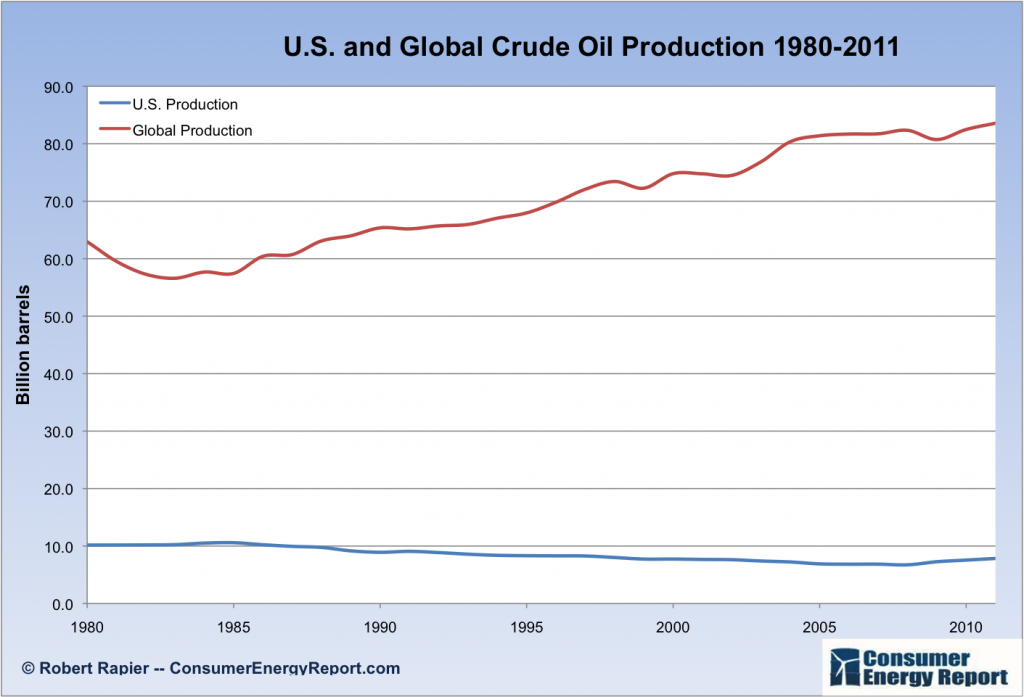 But one very big difference between us and them is that they produce far more than they use, and therefore make lots of money exporting oil. We produce far less than we use, and so we spend a lot of money on imports (with some of that money going to Saudi Arabia and Russia).

Crude oil is getting heavier, contains more sulfur (i.e., is more sour) and requires more energy both to produce and to refine. While BP does not track this information, a quick look at the EIA data on crude oil quality confirms it. They only track the data back to 1985, but since then the overall mix of oil going to U.S. refineries is 5.5% heavier and contains 54% more sulfur.

The implications from this are: 1). Refineries have to become more complex to process this oil; 2). The net energy that can be obtained from a barrel of oil is declining; and 3). As a result the costs to process it are higher. This trend will continue as the world uses up the remaining supplies of light, sweet crude oil.

Link to Original Article: How Much Oil Does the World Produce?