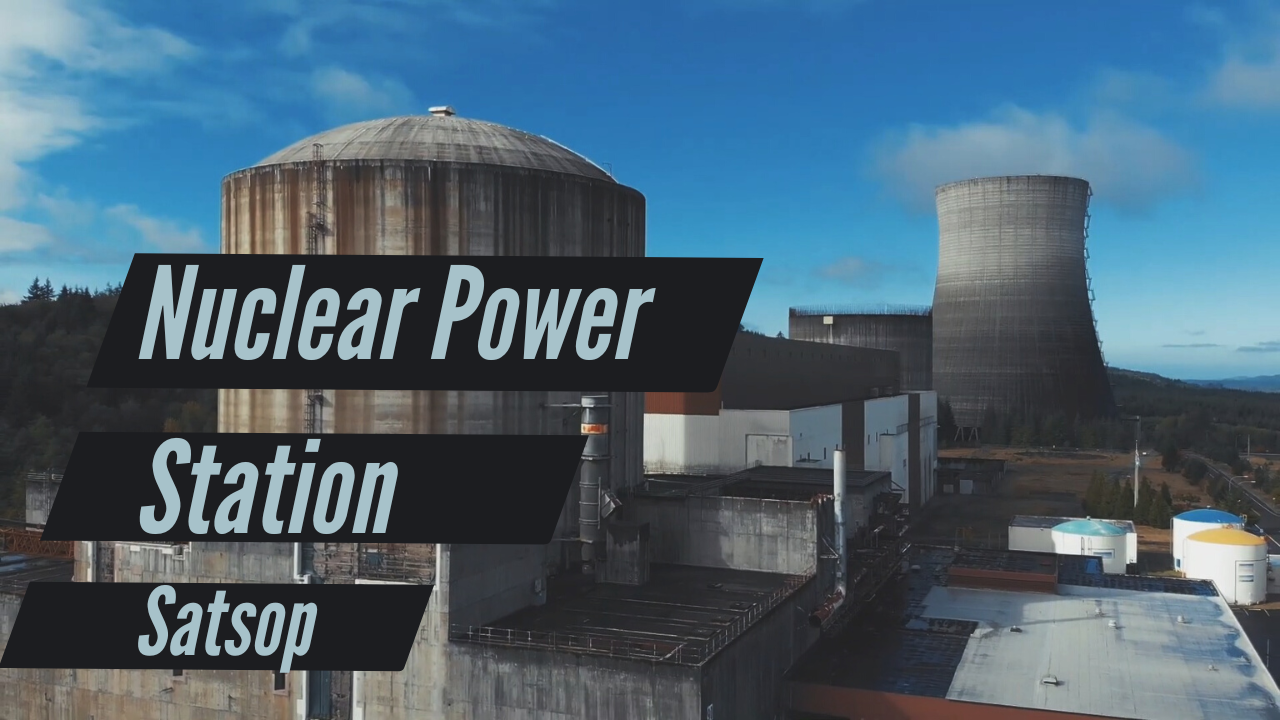 My wife and I recently took a weekend road trip to view the annual shore bird migration along the Washington coast. Because it was along our route, we made a short stop in the town of Satsop.

The above image of a cooling tower was taken at the unfinished Satsop nuclear power station, which is now serving as a development park. Use your left mouse button to click here to see a higher resolution image and then left click once again on that image to see an even higher resolution photo of this cooling tower. Now employ your mouse wheel to scroll up and down that high resolution photo. Use the stairs zigzagging along the side to get a sense of scale.

These designs are popularly associated with nuclear power plants. However, this association is misleading, as the same kind of cooling towers are often used at large coal-fired power plants as well.

The Didcot power station pictured above burns a combination of coal, natural gas, and oil. Note the use of six hyperboloid cooling towers. Cooling towers are used to condense the steam exiting the steam turbines back into liquid water to be converted into steam again and sent back through the turbines. This greatly reduces the amount of water lost as steam.

How do they work? Essentially the rising steam creates a natural draft like your fireplace (ambient air is pulled in at the bottom). The steam must pass through a plastic grid that is being sprayed with water, which in turn, causes the steam to condense back into water. This strong natural updraft negates the need for fans to move the steam. One might guess that the hyperboloid shape may have something to do with the Venturi effect, but in reality, the shape is primarily for structural efficiency (load resistance at a minimum cost). Cylindrical cooling towers are not as wind or earthquake resistant for the amount of material they contain. Click here to see a YouTube video of the inside of a working cooling tower that uses fans.

To get a sense of scale, note the eight foot high fence around the reactor containment structure on the left.  I’m always amazed by how diminutive the containment domes are–smaller than many oil, or municipal water storage tanks.

These house the heart of a nuclear power plant; the reactor vessel which contains the nuclear fuel rods that boil the water to make the steam that spins the giant pinwheel (steam turbine) that is connected to the electric generator the sends electricity over the grid to our homes and cities. This is also the only part of a nuclear power plant that is different from other thermal power plants that use a different heat source (coal, biomass, natural gas, solar, geothermal).

Click here to animate the above schematic. Coincidentally, that looks an awful lot like the Seattle skyline.

The terms “nuclear reactor” and a “nuclear power plant” are often used interchangeably, which can be confusing because they are not the same thing.  A power plant (sometimes called a power station) may have more than one nuclear reactor (each inside its own containment structure) on site. The Fukushima power plant has six reactors (each inside a steel and concrete containment structure, which is in turn housed in a sheet metal outer building).

Although three of the Fukushima power plant reactors were damaged beyond repair when a tsunami overwhelmed the emergency cooling pumps, the other three reactors could, in theory, still be used by the power plant to produce electricity. The Chernobyl nuclear power plant (the poster child for how to do nuclear energy wrong) continued to produce electricity using  its other reactors for well over a decade after one reactor (which had no containment dome) experienced a meltdown.

A Brief History of the Unfinished  Satsop Nuclear Power Plant

For those of you too old to remember, or too young to have watched it unfold, Satsop was one of the four nuclear power stations (and their five reactors) involved with the WPPSS (Washington Public Power Supply System) debacle. From Wikipedia:

Energy Northwest (formerly Washington Public Power Supply System) is a United States public power joint operating agency formed by State law in 1957 to produce at cost power for Northwest utilities. Headquartered in Richland, Washington, the WPPSS became commonly known as “Whoops” due to over-commitment to nuclear power in the 1970s which brought about financial collapse and the second largest municipal bond default in U.S. history. WPPSS was renamed Energy Northwest in November 1998.

Note the term “produce at cost.” This is a Washington State not-for-profit joint operating agency, which should take some wind out of the sails of the anti-nuclear energy crowd who typically portray the operators of nuclear power plants as profit hungry conspirators. These guys were simply incompetent bureaucrats. From Wikipedia:

The directors and the managers of the system had no experience in nuclear engineering or in projects of this scale. System managers were unable to develop a unified and comprehensive means of choosing, directing, and supervising contractors. One contractor, already shown to be incompetent, was retained for more work. In a well-publicized example, a pipe hanger was built and rebuilt 17 times.

There were four proposed nuclear power plants. Click here for a photo and quick facts about each. Three of them were to have a single reactor and one (in Satsop) was to have two reactors (containment domes shown above) for a total of five reactors.  Out of the four planned power plant/stations, only one was completed and is now called the Columbia Generating Station.

Note in the above graphic I put together (to better understand what had gone on) how radically different each power station is from the other. They have three different containment structure designs as well as three different cooling tower designs, and probably different everything else on the inside as well …unbelievable. The French and Canadians used one design which they repeated over and over again. The cost to build the first 777 airliner was astronomical. Imagine the expense of building a different airliner from the ground up for every customer.

Consumers of course had to pay for this boondoggle, but even so, we still have the lowest rates in the country. The fact that rates vary a great deal from state to state is largely a measure  of how badly managed their utilities have been (number of power plants built but not needed). Click here for a list of 150 or so canceled, abandoned or on hold non-nuclear thermal power plants. Proponents of any given energy scheme be it wind, solar, or coal will high-five each other when a planned nuclear plant gets canned.

Who predicted that fracking was going to usher in an era of cheap natural gas? If you were planning to build a wind farm to reduce the fuel bills of your new natural gas power plant, you might need to cancel the plans for the wind farm if it now costs more to build than it will save you in fuel bills. Almost as if to rub salt in a wound, a natural gas power plant was built adjacent to the defunct Satsop nuclear power plant to take advantage of the power lines that had been installed. Fossil fuels win again!