At a cost of $3.5 billion and more than a decade of work, the 192 laser beams are billed as the most powerful in the world.

Scientists working at the National Ignition Facility of the Lawrence Livermore National Laboratory in California, have built the most powerful laser in the world, capable of simulating the energy force of a hydrogen bomb and the sun itself.

The Energy Department is expected to announce Tuesday that it has officially certified the National Ignition Facility, which would clear the way for a series of experiments which scientists hope will eventually will mimic the heat and pressure found at the center of the sun.

The successful completion of the laser is the culmination of more than a decade of work at a cost of $3.5 billion.

“NIF is well on its way to achieving breakthroughs in science never imagined. Through our readiness testing we will see glimpses of what that future will bring,” said Moses. This artist's rendering shows a NIF target pellet inside a hohlraum capsule with laser beams entering through openings on either end. The beams compress and heat the target to the necessary conditions for nuclear fusion to occur. Ignition experiments on NIF will be the culmination of more than 30 years of inertial confinement fusion research and development, opening the door to exploration of previously inaccessible physical regimes.

NIF’s 192 laser beams, housed in a ten-story building the size of three football fields, travel a long path, about 1,000 feet, from their birth at one of the two master oscillators to the center of the target chamber. As the beams move through NIF’s amplifiers, their energy increases exponentially. From beginning to end, the beams’ total energy grows from one-billionth of a joule (a joule is the energy needed to lift a small apple one meter against the Earth’s gravity) to four million joules, a factor of more than a quadrillion – and it all happens in less than 25 billionths of a second.

Each master oscillator generates a very small, low-energy laser pulse. The pulse may range from 100 trillionths to 25 billionths of a second long, and has a specific temporal shape as requested by NIF experimenters.

The laser is expected to be used for a wide range of high-energy and high-density physics experiments, but its primary purpose is to assist government physicists in ensuring the reliability of the nation’s nuclear weapons as they become older.

The Lawrence Livermore lab will be taking order of the world’s most powerful supercomputer –capable of performing at 20 petaflops (1 petaflop equals 1 thousand trillion floating-point operations per second), twenty times faster than the current record holder, and more powerful than all of the systems on the top 500 supercomputer list combined– currently being constructed by IBM under contract by the U.S. government, which will also be utilized to ensure the safety of the country’s nuclear weapons.

“We are well on our way to achieving what we set out to do – controlled, sustained nuclear fusion and energy gain for the first time ever in a laboratory setting,” said Director Moses. 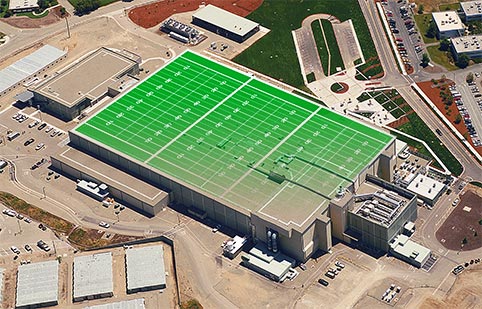 The Laser and Target Area Building is the size of three football fields.

“This laser technology has the potential to revolutionize our energy future,” California Gov. Arnold Schwarzenegger said during a tour last year of the stadium-sized NIF facility. “If successful, this new endeavor could generate thousands of megawatts of carbon-free nuclear power but without the drawbacks of conventional nuclear plants. This type of innovation is why we are a world leader in science, technology and clean energy, and I could not be prouder that this work is happening right here in California.”

The project is a national collaboration among government, industry and academia and many industrial partners throughout the nation.

The NIF’s 192 laser beams are 60 to 70 times more powerful than the world’s second strongest – a 60-beam system located at the University of Rochester.

Click here to take a complete 360° panoramic virtual tour of the entire NIF facility and their laser system.

Accurate, Expert Analysis. Get the Inside
Scoop Before It's News. And it's 100% Free.